We build computational and visualization tools to translate environmental change into organismal responses. Details on the TrEnCh project website.

A key challenge in raising public awareness of climate change is conveying the ecological and human impacts of a given (e.g., 3°C) temperature increase. Biophysical models compute heat budgets for organisms and enable translating environmental conditions into potential body temperatures. They can thus predict how warming alters thermal stress and performance. They can be integrated with demographic models to scale up to the population, community, and ecosystem impacts of climate change. Organisms interact with their environment at small spatial and short temporal scales, requiring downscaling of most available data describing current and projected future environments. The high temporal and spatial resolution data will enable quantifying organismal responses to both environmental means and variability. We are developing tools for visualizing the ecological impacts of climate change that will be disseminated through education and outreach programs. 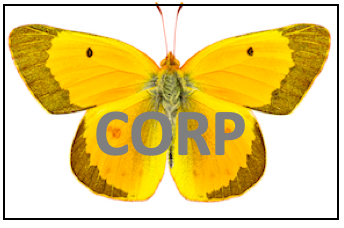 I (in collaboration with Joel Kingsolver, UNC) have been investigating the interplay between phenology, phenotypic plasticity, and evolutionary adaptation in response to climate change. Our research focuses on a key thermoregulatory trait (wing color, which affects absorptivity of solar radiation) of Colias butterflies in montane, seasonal environments. An a priori expectation was that climate warming will select for lighter wings at low elevation (thus reduced heat loads) but darker wings at high elevation (to capitalize on warming). We extended our mechanistic modelling framework that incorporates microclimate, heat balance, and demographic models to include evolution and plasticity. We found – as we predicted – that evolutionary selection favors wing lightening at low elevation but wing darkening at high elevation across the butterflies’ distribution. Importantly, however, we found that seasonal and annual variation in climate causes the strength and direction of selection to fluctuate.

Our models suggest that plasticity in wing absorptivity can facilitate evolution, particularly at lower elevations with long seasons, by reducing temporal variation in the strength and direction of evolutionary selection. Phenological shifts caused by environmental effects on developmental rate can also reduce variation in selection. By using lab and field experiments and museum specimens to test our models, we confirmed model predictions in part but also highlighted how the interactions of multiple responses (e.g., plasticity and evolution) complicate phenotypic shifts. Extending the models to biogeographic scales and to future environments suggests that evolution and plasticity will shape responses, and that evolutionary lags may ultimately confer sensitivity, to climate change. 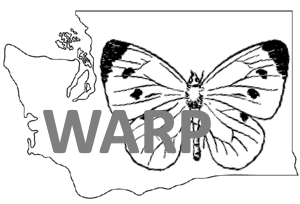 We (in collaboration with Joel Kingsolver at UNC, Gwen Shlichta at Edmonds College, and Adam Steinbrenner at UW) are building upon the CORP project to test how selection on butterfly traits has shifted in response to recent cliamte change. The research will identify the biological mechanisms underlying evolutionary and plastic responses to climate change by quantifying how butterfly temperatures have shifted over several decades and developing a mechanistic model that links the temperature changes and traits to ecological and evolutionary responses. The following studies will test the mechanisms predicted to drive evolution and refine the model. Repeating field selection studies will investigate whether selection on Pieris rapae larval thermal performance curves (TPCs) and on Pontia occidentalis adult body size and wing traits has shifted over time. Studying selection on several wing traits across seasons will indicate relative selective responses to thermal means versus extremes and assay whether selection varies seasonally. The research will determine whether selection results in evolution of larval TPCs as well as adult traits and their plasticity. The project will test several hypotheses related to recent warming. Performance at high temperatures will be enhanced relative to the past. Wing coloration involved in heat-avoidance postures will be lighter. Wing coloration involved in basking may lighten in response to climate warming, but there may be selection for wing darkening to allow for performance in cool, early season conditions. These opposing selection pressures will lead to amplified seasonal variation in selection and selection for increased plasticity. The research will additionally assess whether genetic correlations and variation have constrained evolution and whether they have shifted over time. The research will further develop and test phenotype-based models to solve the problem of unpredictability in climate change biology.

We collaborate on a grasshopper resurvey project founded by Cesar Nufio, HHMI, to examine shifts in traits, phenology, abundance, and performance of grasshoppers along a Rocky Mountain elevation gradient (since initial surveys and specimen collection from 1930-1960) in response to recent climate change.

The project is leveraging survey and specimen data, from recent and historical periods, in an assemblage of grasshopper species found along a montane elevation gradient that vary in traits such as dispersal, phenology, morphology, and thermal specialization. Field reciprocal transplant experiments will quantify the integrated response to the environment, while assessing whether local adaptation and plasticity moderate reproduction and survival constraints along the environmental gradient. The transplants will use physiological and genomic biomarkers to test the hypothesis that survival constraints predominate at low elevations, while reproduction constraints predominate at high elevations. Lab common garden experiments manipulating environmental attributes that vary with elevation (temperature, temperature variability, photoperiod, radiation, hypoxia) will test physiological mechanisms that underlie fitness constraints. Model building will integrate these physiological mechanisms to predict responses to the elevation gradient. Then, historic survey and specimen data will be used to test whether these models successfully hindcast patterns of genetic, physiological, phenotypic, and demographic responses to 50 years of environmental change.